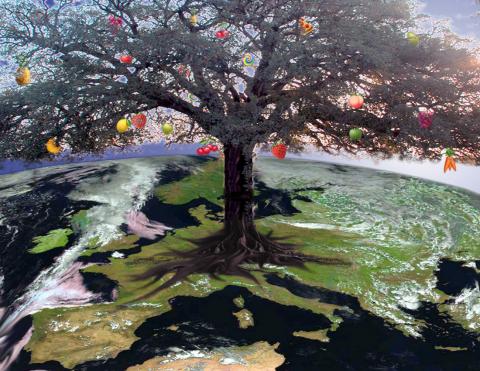 Our world is facing many fundamental problems that exceed the capacity of individual countries to solve them. If we do not deal very quickly with these problems in a large-scale collective human effort, global society or even the planet itself may not reach the end of this century, at least not in a healthy way. In fact, a considerable part of the human and animal population, and disturbing portions of the Earth have already reached that point and do nothing but fight for their mere survival. The situation is becoming increasingly unstable and unsustainable.

Unfortunately, most people are so busy simply keeping up with daily life that they do not even find the time or energy to think about it, much less to act. Others prefer to avoid any worrying and choose to let themselves be distracted. And then there is a small but privileged number of people who benefit from all this and have the power to keep other people so occupied, distracted and even in that sorry state of mere survival.

Fortunately enough, small but growing groups of people all over the world are waking up to this reality. Each group faces it from one of the various perspectives, be it climate, ecology, evolution, a humanitarian or social approach, psychology, education, health and nutrition, science, art, sports, justice and sometimes even politics, law, business or economy.

Europa's colourful history is full of people from very diverse cultural backgrounds that have contributed to global society with brilliant and constructive inspirations: from Galilei and Newton to Tesla, Einstein or Bohr; from Dante or Cervantes to Voltaire and Kafka; from van Gogh and Mozart to Picasso and Freddy Mercury. Precisely in this diversity lies Europa's wealth and strength. It offers a far broader and richer basis for creativity and inspiration than is possible in a homogenious society where everybody eats the same food, has the same traditions and speaks the same language. Europa is an old tree with strong roots that carries many different and sometimes unexpected fruits.

Being also the territory of the world with the highest degree of freedom and justice, it is precisely in Europa where those innovative social groups sprout and grow more easily. At the same time, Europa also disposes of the essential resources, such as capital and knowledge. This makes Europa the place par excellence, possibly the only one, with enough potential to unleash the change that the world needs NOW to reach the 22st century in a healthy way.

But this change can only happen in a Europa that is truly united in diversity for and with its people. So not exactly this EU which essentially is just a political, monetary and market union where the representatives of each country are still mainly guided by national interests. It should be a Europa united by its conscientious citizens, in a human and social sense with a true spirit of "union", of coexistence and sharing. In fact, a community.

Europa's potential: its people and diverstity?

Do we want a better world?
Is a better world possible?
No, no, nothing has changed?
Does a better Europa contribute to a better world?
Does Europa have the potential to be better?
Can public opinion shape Europa's potential?
First "Chain of Thoughts"
All That We Share
Do we manifest reality with our thoughts?

Europa of the people

Is a united Europa is a political question or a human question?
Some first simple questions focused on the individual european person

BREXIT better for Europa?
Scotland independent after BREXIT?
A Green New Deal for Europa?
Are the lobbies in the EU acceptable?
Dragging EU legalization: abortion, cannabis, prostitution...
The current EU model, obsolete?
Does Europa need a new level of thinking?
BE the change!

People and Planet
A better Europe for a better Climate?
Open letter to Greta and Polly
How to keep the Climate Movement alive?
What priority do you give to climate in these EU Elections?
Do you consider mass destruction of nature a crime?
Does Earth need a law to make Ecocide an international crime?
Do you support the Global Strike(s) for Future?
Should courts condemn governments for bad climate policy? In the Netherlands it already happened.
Should Greta receive the Nobel Peace prize?
Nature First!
Global Strike 4 Future - Milan, polls in the street
Climate emergency
Austrian World Summit 2019 - Greta Thunberg
What are your thoughts about climate change?

Do you want economic policy in Europa to be transparent?
Free Speech!
The importance of Privacy?
Are whistleblowers traitors?

Do schools help our children find and develop their passion?
Does Europe need a different school system?
Should Europa adopt the educational system from Finland?
Should human values also be thaught and measured at school?

Science as love for nature, the universe and the world that surrounds us!
The Fibonacci sequence
Quantum theory - entanglement

Riccardo
A Dream!
Generic
The potential of Europa, our vision
Mission: stimulate and strengthen European Public Opinion
A different level of thinking?
A first step